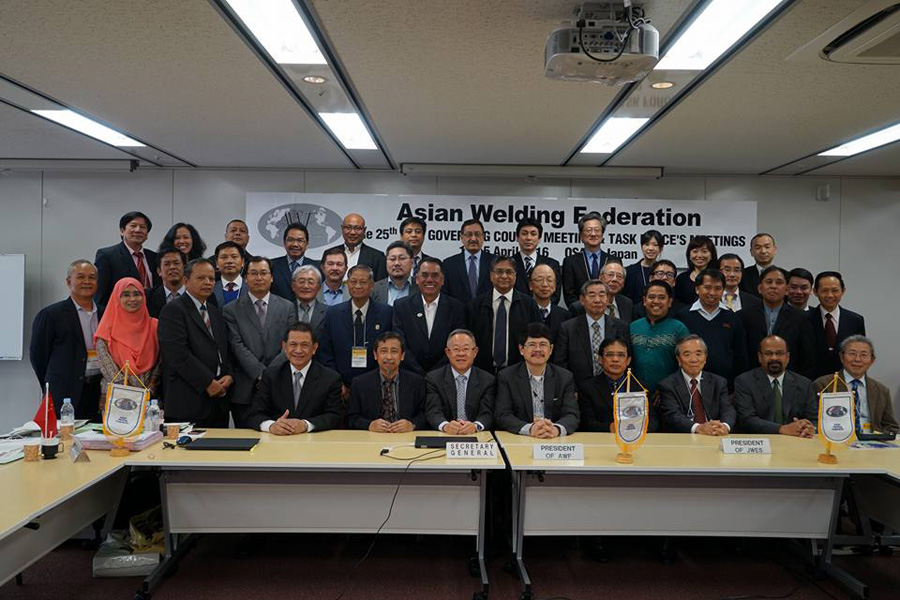 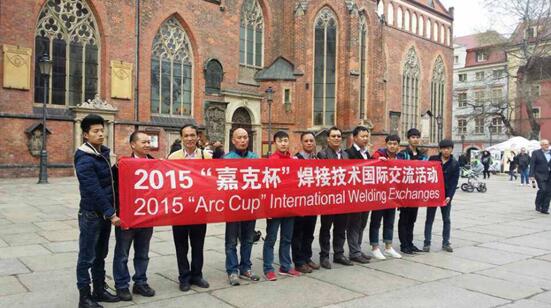 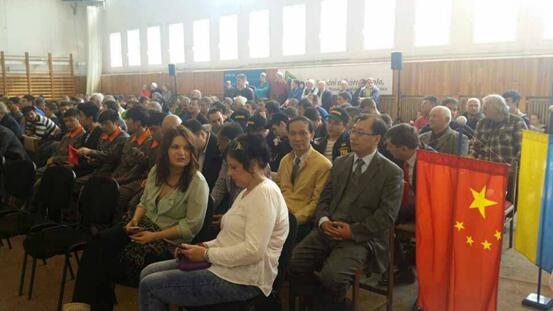 (Opening Ceremony of the Competition) 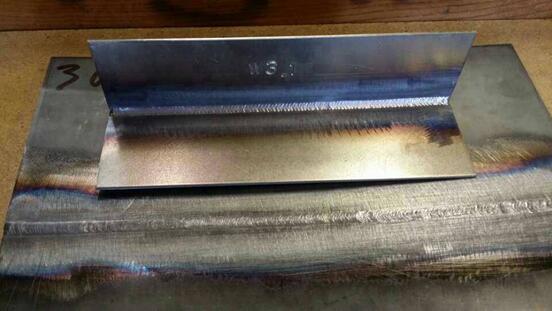 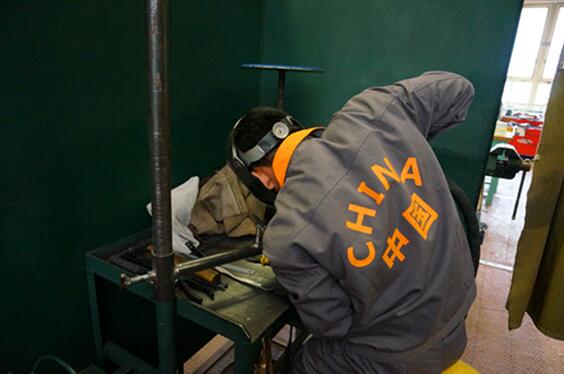 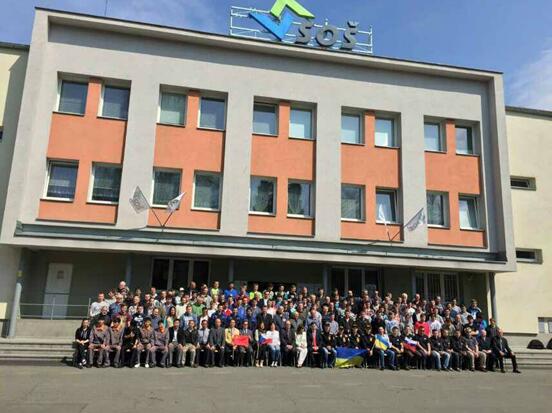 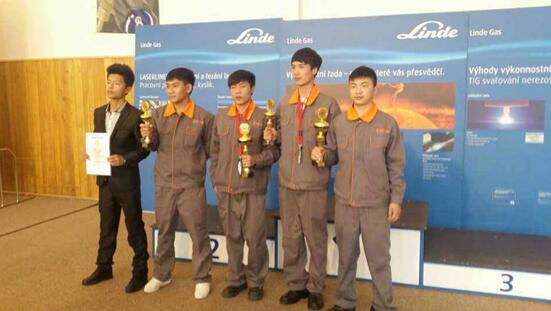 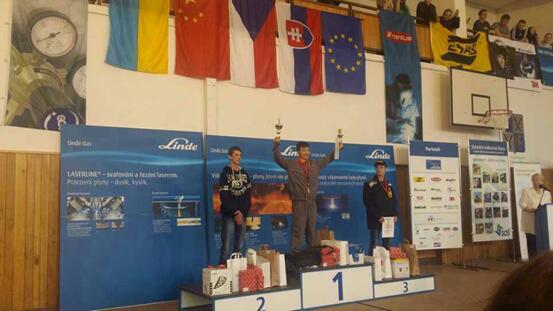 II. The second competition in Germany, the first prize was won on KUKA robot welding.

During 15th to 16th Sept., 2015, the “2015 DVS Robot Welding Competition” co-hosted by ESSEN Exhibition Company and DVS was held in ESSEN exhibition center of Nuremberg in Germany.

(Germany host was making pre-competition introduction in the venue)

The competition includes written examination in English and robot operation. Written examination covers robotology, welding as well as safety knowledge, and requires answer in English. Practical operation is the programming and operation to designated robots of FANUC, KUKA and YASKAWA.Zhang Dongxiao and Wang Taizhong from CRRC Corporation Limited entered for FANUC robot, while Yan Hongbo and Wang Cai from FAW Group entered for KUKA robot, Li Jinbao from FAW Group entered for YASKAWA robot.In the end, on the condition of difficult language communication, unfamiliar with equipment and in face of many strong rivals, Yan Hongbo and Wang Cai from FAW Group won gold medal and bronze medal respectively. Foreign peers were impressed by outstanding performance of Chinese competitors and the foreign referees couldn’t help exclaiming after saw the data, “Excellent!” 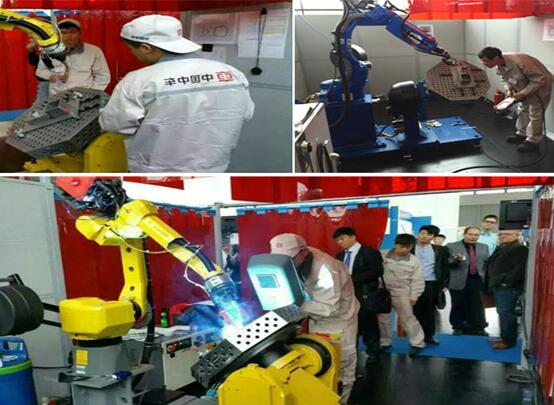 (Chinese competitors are in competition)

As the saying goes, an accomplished disciple owes his accomplishment to his great teacher.To prepare for the robot welding competition, state-owned enterprises arranged experienced coaches. The coach of three competitors from FAW Group is Bian Qingzhan who has many years’ theoretical and practical experiences of robot welding. He is the director of axle workshop and is always working on front-line technology management. Two competitors of CRRC Corporation Limited is Xie Yuanli who is the representative of the 18th National People’s Congress, and has won “national model worker” and Chinese Skills Prize. Gold prize winner of two competitors from FAW Group both not only lie in self hard work, practice, assiduous study, but also the concentrated guidance, words and deeds of professor Bian Qingzhan. Although two competitors of CRRC Corporation Limited haven’t won prize in the competition due to “disorder play”, the cultivation and teaching of Xie Yuanli will benefit them for a lifetime. Advanced skills and good morality of these two professors will be inherited by their apprentices. 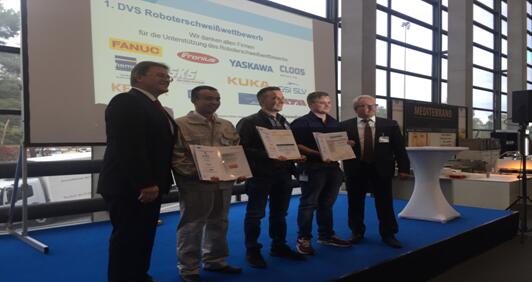 III. The third competition in Hungary, the first prize was won on welding practical operation item. 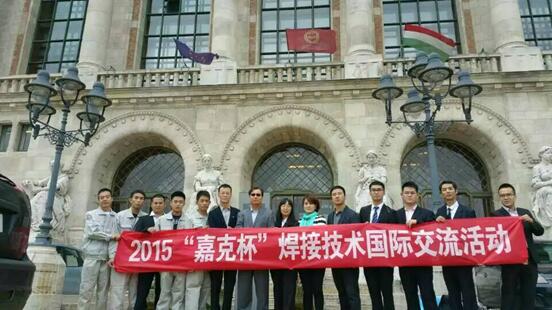 （Photo in Budapest University of Technology and Economics）

The preparation is impossible since the host doesn’t disclosure detailed competition items and only gives limited and abstract and very few competition technology profiles before the competition.

In face of competition technology rules of the host, “Arc Cup” competition group divided competitors into groups. Each group has engineer, professional welder, English translator, thus members can learn from each other’s strong points to offset their weakness. For weak theoretical basis of competitors, professional teachers were invited to help. 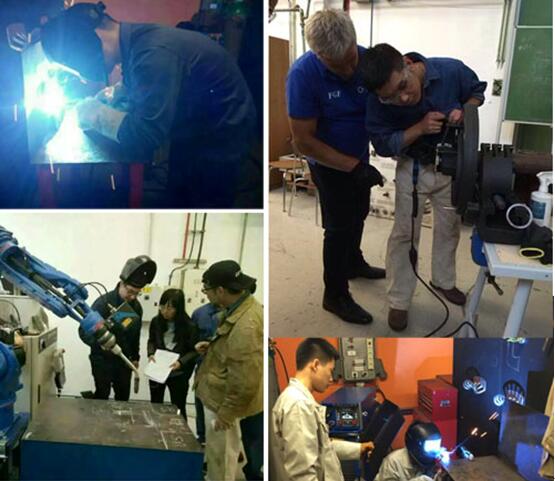 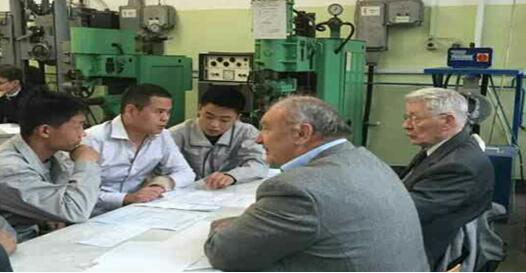 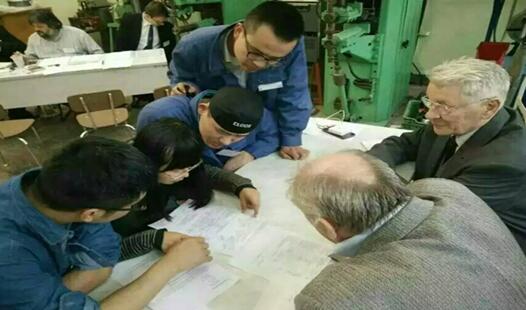 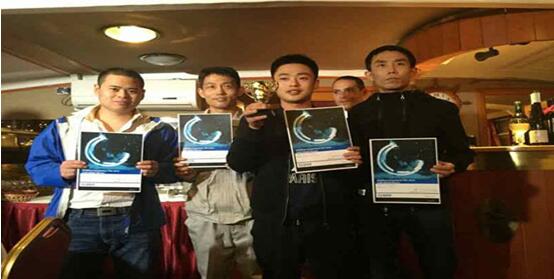 As the associated event of International Institute of Welding (IIW), the competition aims to promote the skills exchange among young professionals.Therefore, the concurrent professional symposium with high standard was also held and Dr. Liu Zhenying from Beijing ARC Xinxing Science & Technology made report on the seminar. Group members all participated the seminar to capture the latest cutting-edge welding information and know about the latest professional trend of industry. “Arc Cup” leads the latest industry wind indicator. 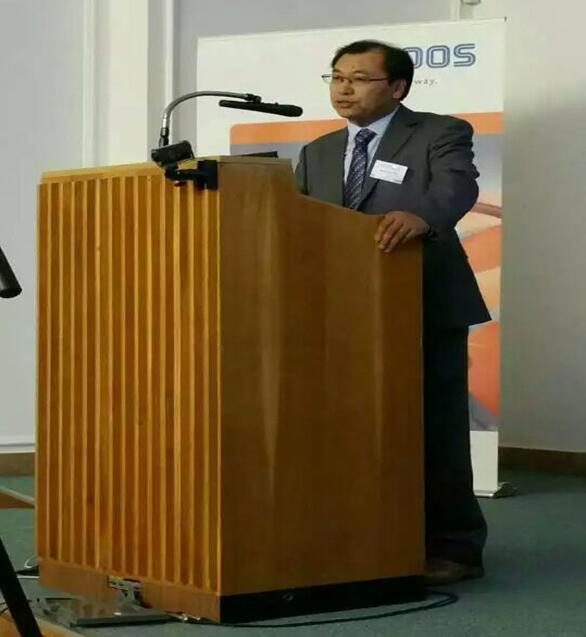 （Dr. Liu Zhenying Made a Report on the Seminar）

IV Competition in Cambridge, the silver medal was won on European Welding Competition

On 21st Oct. 2015, the WeldCup 2015 technical exchanges and competition which was co-hosted by EWF (European Welding Federation) and TWI (The Welding Institute), attended by many international welding Countries, such as Austria, Belgium, China, Germany, Hungary, Romania, UK, etc., came to a successful end in Cambridge, the headquarter of TWI.
At the Competition, the organizer appointed the following four welding processes as MMA, MAG, TIG and FCAW.

Chinese Group members including Lan Tianyu and Liang Meng from CNPC, Li Shuo from China State Shipbuilding Corporation spared no efforts and overcame all difficulties to achieve the 2nd place on the team competition against German Group. At the same time, Li Shuo was awarded as the Best TIG Welder. 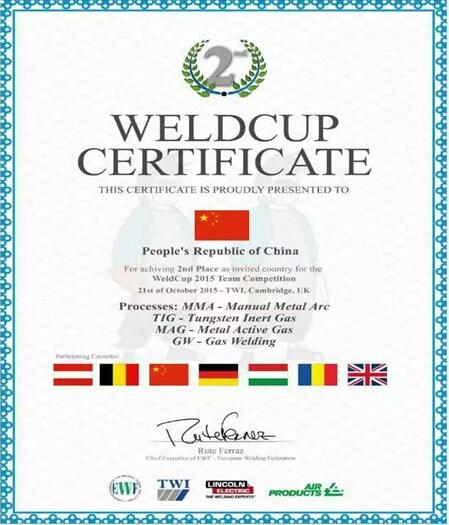 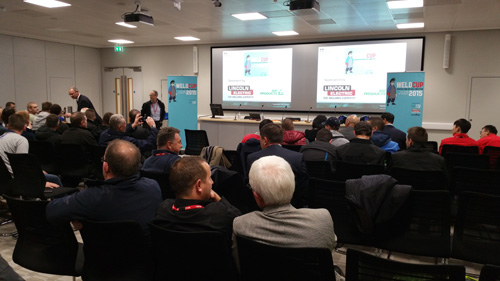 TWI (The Welding Institute) is a non-profit organization in the form of enterprise for operation. It owns about 400 staff and its main business covers equipment, material, training, authentication, etc. Recently, Organizing Committee of “Arc Cup” International Welding Competition (OC ARCIWC) is always keeping in close contact with TWI and seeking for strategic cooperation. In 2016, OC ARCIWC and TWI plan to conduct a series of cooperation to contribute for Chinese high-skilled professionals cultivation. 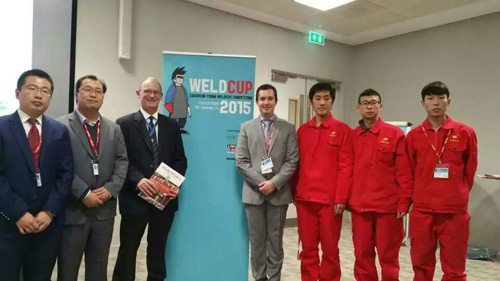 (Group photo of TWI Chairman and person in charge of EWF) 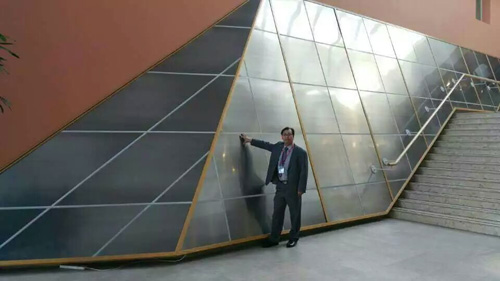 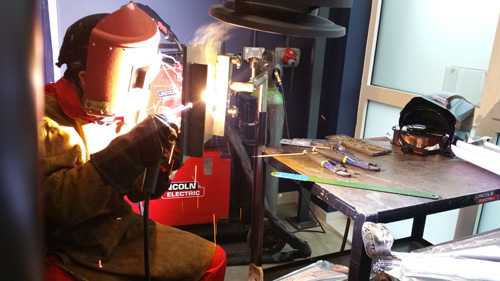 （Chinese competitor was in competition）

V. Only one competitor competed in Chicago, while the rest seven competitors unfortunately couldn’t come due to visa delay

From 8th to 17th Oct., 2015, the “2015 AWS International Welding Competition” held by AWS (American Welding Society) was opened in Chicago, America. FABTECH 2015 was also held in McCormick Place. The group members from China Huaneng Group and Henan Cement Association took part in the Competition and visited the exhibition as “Arc Cup” delegation 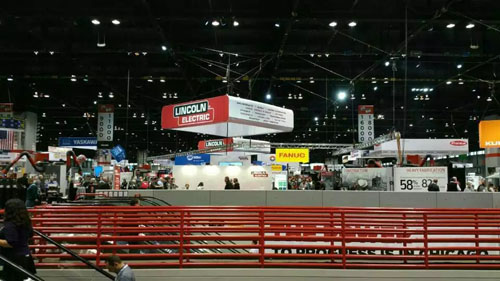 More than 200 competitors from Canada, Mexico, Brazil, Finland, Austria and China, etc., gathered together to exchange experience and broaden their view by way of competition. 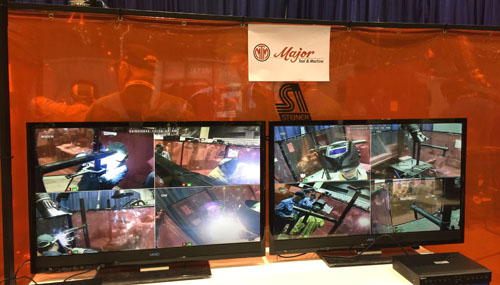 （Live show of Competitors in competition） 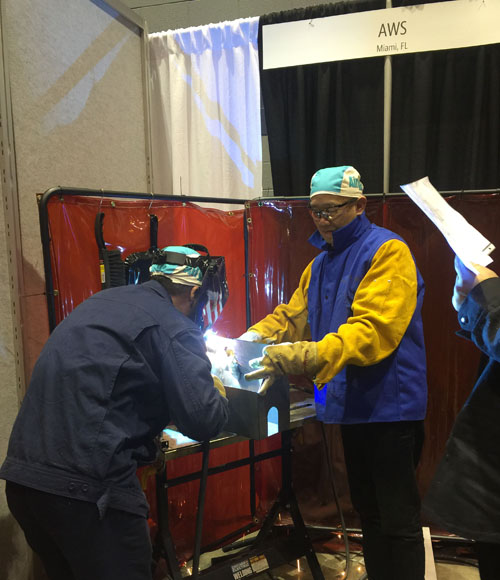 (Chinese competitors was in competition)

As the relevant event of AWS, this competition aims to actively boost the technical communication among competitors around the world. In addition, Chinese competitors were invited to attend the AWS Board of Directors Conference and received high-standard reception. And Dr. Liu Zhenying, the leader of the delegation sincerely invited AWS to participate in the 2016 (4th) Beijing “Arc Cup” International Welding Competition, 2016 (2nd) International Conference on MANUTECH & SKILLS and MANUTECH & SKILLS Demonstration Show.

（Dr. Liu Zhenying made speech on AWS Board of Directors Conference）

2015 “Arc Cup” International Exchange Activities have ended. And the 22 competitors have returned to their work place. After the glory and applause, their work and life seemed to recover to its original state. However, the precious experience of going abroad to exchange on the latest international technology and skills may become their lifelong memories. The shiny metals and trophies can become the fingerpost of the ordinary welders so as to make them become better and stronger. The welders who are honored as “Excellent Skills Position Professionals of State-owned Enterprises” or “Excellent Young Skilled Position Professionals of State-owned Enterprises” by SASAC may hence change their career path.

Let us bless for “Arc Cup”! The “Artisan Spirit” cherished by “Arc Cup” is one of the most significant core competence among Chinese manufacturing industries! We look forward to meeting with you in 2016 (4th) Beijing “Arc Cup” International Welding Competition, 2016 (2nd) International Conference on MANUTECH & SKILLS, and 2016 MANUTECH & SKILLS Demonstration Show from June 18th to 23rd in Beijing, China!

For those attending the auditor/examiner workshop and examination on 25th October (Saturday), 0900 - 1500

Attached are the latest OPs for your reference.

Attached is also the content page of the ISO standards, which will be used for the workshop and examination.

Let me know should you need any copies of it.